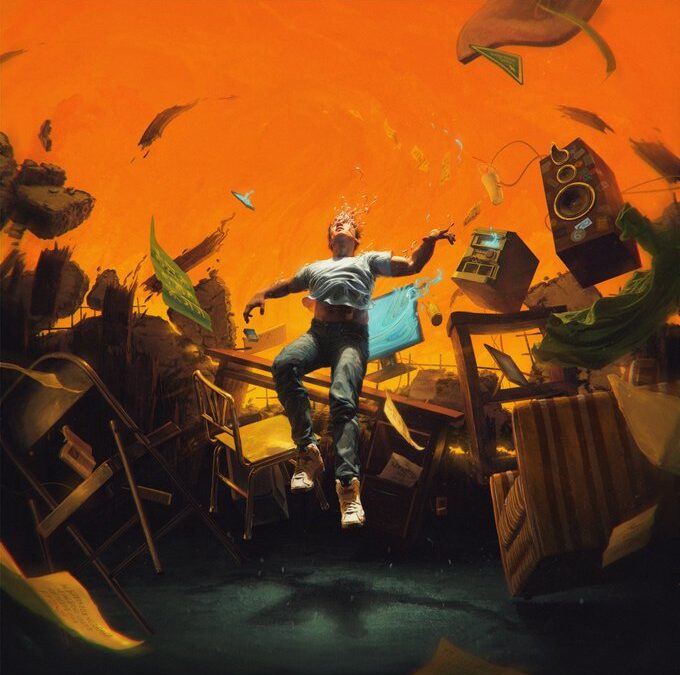 “Tryna be the greatest, that shit been dead, I’m tryna be the happiest I can be instead.” This is one of the lyrics from Logic in the album that we are reviewing today. His final album, No Pressure. I typically don’t start out with lyrics of songs from albums I’m reviewing, but this one is very important as it sets the tone of the album. This album serves as a victory lap, and a cathartic affair for Logic. In the words of Thalia, “Welcome to the No Pressure project.”

So, let’s put some things in context: Logic first gained popularity in the early 2010s with his Young Sinatra series of mixtapes (Note: he had Young, Broke, and Infamous in 2009, but YS is how he gained popularity), and when I tell you that they were dope… Do yourself a favor and find them on Soundcloud. Then, he released his first studio album in 2014, the precursor to the album I’m reviewing, Under Pressure. And Under Pressure is unbelievably good! It has a connected concept, the production is great, and it contains Logic’s best song, “Gang Related”. The party don’t stop there, though, as he released something each year after that, but something happened in 2017. This is when he released Everybody. Everybody is probably his most commercial album, as it has the song, “1-800-273-8255”, the Suicide Hotline number. While this was a very noble song to have, the album itself… paled in comparison to his previous works. Why? Well, there was an insane amount of redundance (I know y’all have heard the Logic is biracial memes), the concept was pretty loose, and, most crucial, he wanted to please everybody.

I say this to say that No Pressure is not like that. Logic’s work has been inconsistent over the past couple years, but this is changes the game. The album opens, welcoming us to this project, and Logic talks about how when he was growing up, he was seen as lesser, how he knew he wanted to see his crew next up, like cotton material, and how people are super nosy, telling you to do what you should do when they don’t even know half of what you know. And then, we get into “Hit My Line”. He talks about how it’s going to be a good day, how people stay bitchin’ on Twitter, how politicians lie, and how #slacktivism is at an all-time high. Then… GP4.

I… MISSED… THIS! For those that don’t know, Logic has a series of songs, called “Growing Pains”. This is the 4th installment, and goodness gracious, does it go HARD! He samples, “Elevators (Me and You)” from OutKast, the beat and the chorus, where he talks about how we’ve been in a perfect harmony and have come a long way since the projects. He talks about how he rhymes fast because of his anxiety, has a story describing a night for him when he was younger in Maryland, talks about how he hit up Erykah Badu for the blessing to use a beat for this album (man I is) even though she doesn’t own the sample, and two of my favorite lines off this entire album. “Trigger-happy police tend to trigger happy people.” This is a great line that sums up what happens when we see countless faces that look like us lying lifeless on the news and social media. It doesn’t describe everything, but that line still holds power. The other line is that he keeps it G, kickin’ in the door like Track 4 from Biggie’s Life After Death, and he tells us to do our research and we’ll find the key. So I did my research, on Genius and I found this. Kick in the Door is in the Key of G Major. YOO!!!!!!!!

“Open Mic/Aquarius III” is dope as well, the first half being where the opening line of this review came from. The latter half is about how he used to only care about his career, but now he has something even better to care about: his son. “Soul Food II” talks about how we’re not going back, just moving forward and about how people don’t love your new stuff until it becomes your old stuff. The 2nd half expands on the story he was telling in one of his previous albums, The Incredible True Story. (My personal favorite Logic album)

Production- wise, this album is INSANE. Using a “Dreamflower” sample, using multiple OutKast samples, and having beats that truly match the songs. “Aquarius III”, for example, sounds reflective. Lyrically, Logic is mature on this album, for the most part. Plenty of these songs have this message, talking about how we need to live our lives for ourselves and not for others, how there’s a reason he’s in a mansion, and the dude hatin’ and following him just to criticize is in a cot (this doubles as mature and immature), and of course, his current life. This is where Logic is his best and happiest. On “DadBod”, Logic talks about his everyday life, which is filled with diapers, feeding, buying food, and deciding between which brand of trash bags he wants. This is fantastic, because it shows how he has matured. He even says himself that he’s not a kid anymore, and he’s not about to rap about the “good ole days”, like people getting together talking about their fun times back in high school or college. He’s about moving forward, not back. “Dark Place” probably takes the cake for finishing out top 5, as he talks about how he still deals with depression and anxiety. He deals with not feeling good enough, Black enough, and worried about saying too much at times. He talks about his Peace, Love, and Positivity motto, but confesses that he still searches his name on Google, and just sees posts about how he is trash. A big thing about this song is the fact that he acknowledges that it’s okay to be sad and end this song sad, a powerful statement. Positivity has never been about smiling through BS. It’s about feeling your feelings, acknowledging them, and knowing that tomorrow is coming. We end the album with “Obediently Yours”, a song that apparently was meant for Ultra 85. (Heard Em Say’s outro technically concludes the No Pressure program and welcomes us to Ultra 85, 2 songs) It is the audio of Orson Welles, talking about equality and how we’re all in this together. And how the privilege need to use their privilege to help the less fortunate.

With all this said about the album, there are unfortunately still some rough spots. Logic has been pinned as repetitive at times, and… that unfortunately doesn’t change in this album. A lot of songs discuss the “rags-to-riches” theme, and after the first couple songs of it, you end up getting annoyed by it as opposed to endeared by it. Then, we get into some of the less desirable songs, in my opinion. “Perfect” will probably get the most hate, but it is just okay. Not good or bad, just okay since it’s only function is a breather and brag rap song. It’s sandwiched between two great songs so it is just a breather. “A2Z” is a song that I can’t get into. The idea of it seems to be one of those alphabet cyphers, but that concept falls flat on its face and makes it rough to listen to. However, the biggest issues aren’t the songs, but the repetitiveness within them.

Overall, this is a 3.75/5. This album is really good. Logic knew that he had to bring it for his final album, having been heavily criticized for the quality of his albums in the past few years. He came with something that felt like a love letter to his old fans, as well as advice. He brought back every era of his, and was able to make it sound fresh and fun. While he definitely had his repetitive moments, Logic made a fantastic sequel to Under Pressure. Now, let me say this: Logic was one of my favorite rappers several years ago. I listened to his mixtapes, listened to Under Pressure, listened to The Incredible True Story, and so on. I was waiting for this Logic to come back. Not Logic talking about the same subject matter, but Logic showing how damn good he was on wax. I’m beyond happy that we got this for his final album. Logic, it has been dope to listen to you, and I hope you are able to live your life like the title of this album: with No Pressure. MT Out!